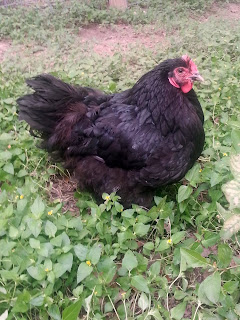 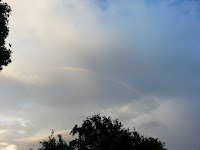 i find many things in the world to be miraculous, though most 'miracles' have some kind of logical explanation. for instance, the new human creature growing inside me right now is certainly miraculous, although it's also perfectly scientific...cells are dividing and differentiating along a predicable path, and reproduction is one of life's most fundamental properties.  the exquisite rainbow and sunset i saw last weekend were miraculous, but also completely logical--light was refracting through the atmosphere in measurable ways, and my brain was perceiving the colors and reacting to them...all very explicable.

it is rare, therefore, when one encounters a real life actual miracle with no scientific explanation, an event that is the least probable outcome of a given situation with no perceptible base in logic.  WELL FOLKS, THIS HAS HAPPENED ON THE TUF. 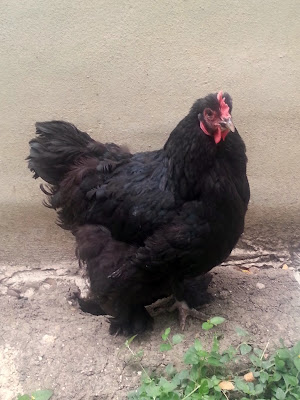 Bolo The Chicken Came Back!

a couple of weeks ago i wrote about how bolo had disappeared without a trace--no feathers, no kerfuffle, no nothing.  i looked for her to no avail, and hoped she would find her way home.  but after a few days, i was certain she was gone for good.  this neighborhood has confirmed sightings of nearly all possible chicken predators: stray cats (always), stray dogs (often), kids with bb guns, hawks, snakes, skunks, raccoons, possums, and other chicken keepers.  to comfort myself i had decided she had been bodily assumed, or even that some other chicken fancier had seen a huge black chicken with feather pants walking down the street and had thus captured her for their own purposes.  her disappearance from the run happened tuesday, september 18th.  by that weekend, i was sadly sure she was gone forever.

fully TWO AND A HALF WEEKS later, on thursday, oct. 4th, i went outside to check on the flock and there she was. back in the run.  a little bedraggled and dirty, but eating and scratching and clucking like nothing had happened.  how is this possible?  i have no logical explanation.  it is the least probable outcome of the vanishing chicken incident. a real, actual, unscientific miracle.
she got the right-wing clippage that i have visited upon the other birds to reduce the chances of further chicken vanishments.  of course, wing clipping doesn't prevent worm holes, or alien abduction, or trans-dimensional quantum jumping, or random space time fluctuations, or any other theoretical event that might result in a chicken disappearing from and reappearing to the exact same east-austin chicken run over a 2.5 week period.  at any rate, i'm just glad she's back! 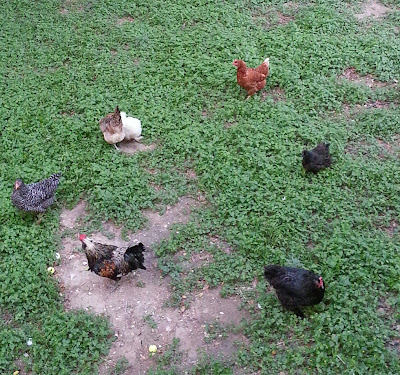