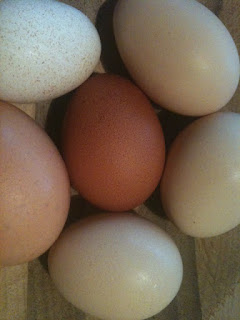 january was a hiatus for everyone here at the TUF, including our five lovely chicken ladies and one pretty/loud rooster.  well, i guess the rooster never goes on hiatus, if you know what i mean.  but the laying ladies took a couple weeks off in january, which i discovered has more to do with the amount of daylight available than anything else.  who knew?  chickens lay best when there are 14 hours of sunlight in which to scratch around.  so as the sun comes back, so do the eggs.  and lately we've been back to our pre-january 2 and 3 eggs a day rate, but i am still waiting on the theoretically predicted but as-yet unmanifested 5 egg day.  that, my friends, will be....well, it'll be a 5 egg day! 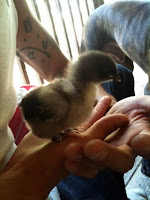 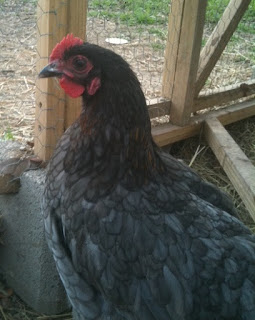 the egg in the middle up there is twitter's first viable egg...the tiny gray chick is all grown up!  as she came into laying age, she had a couple "miss-eggs--" two were broken to bits before i could collect them, and one intact one had a distinct beak-shaped hole in it. i can only imagine the surprise a chickendividual might feel when one day one's body produces and then pushes out an ENORMOUS hard-shelled ovoid object. i would probably peck it too. 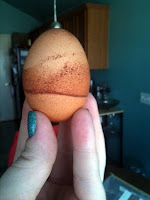 anyway, they are beautifully dark chocolate brown, and of course delicious!

something a bit odd happened, though; twitter laid about 3 beautiful eggs, then this extremely strange egg, and now has stopped laying anything for a couple weeks. i'm thinking she may still be getting over the shock of having these strange objects emanate from her being.  too bad there's no way to have an honest conversation with chickens re: the ins and outs of poultry puberty. 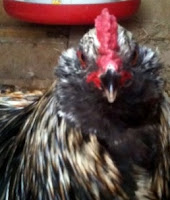 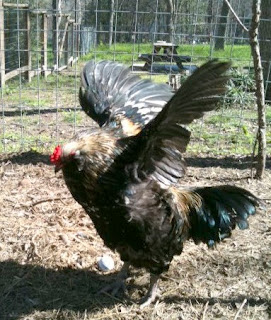 ...which brings me to tumblr, our other feathered pubescent.  at 7 months he has come into his own as a testosterone-laden, crowing, wing-dancing, hen-tackling cockerel.  he is the most dinosaurish thing i've ever seen; weird- and awesome- and creepy-looking! 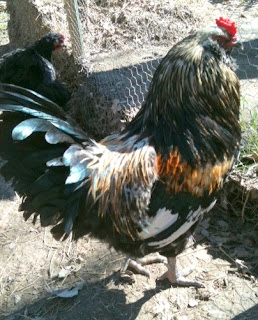 his comb has really started to stand up, and he struts amongst the girls with such self-importance.  he also REALLY likes to hear himself crow.  often at the most random of times.

in fact, during an overnight thunderstorm recently, he crowed ALL NIGHT. 1 am, RR-RR-RRRRRRR. 3 am, RR-RR-RRRRRRRRRRRRR. to the point where i was imagining being the neighbors and changing his name to "soup."  the next day, we brought eggs to the 3 sets of nearest neighbors and took an informal survey of rooster annoyance.  it's unclear whether the egg bribe influenced their responses, but they all either said they didn't notice (!?) or that it wasn't bad enough to detract from their quality of life.  we left the door open for honest rooster complaints, but so far none have come up.  for the moment, tumblr stays tumblr in all his colorful, noisy glory. 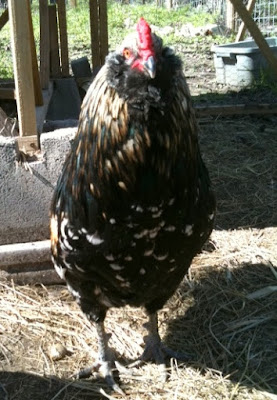 a word on eggs: i have not noticed any difference in the taste or appearance of the eggs that have been laid since tumblr started getting eggy with the ladies.  i can only assume some of them have been fertilized, but there hasn't been any strangeness/grossness associated with this fact.  and as long as he stays this side of fatally annoying, i would like to dabble in chicken genetics perhaps....especially around growing fancy colored eggs!  ambitious? yes, and not for the near future.  but i am having a boutique egg farm fantasy.... 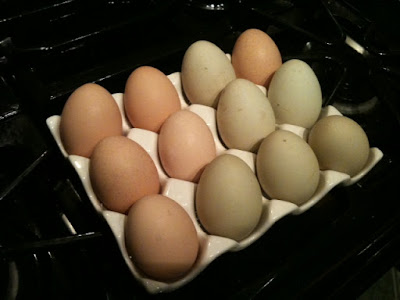 at any rate, these are the newest developments from the TUFlock. we're glad to be getting eggs again, and i look forward to spring, where i believe an egg bonanza may be had! 14 hours of sunlight, 5 laying hens, here we come! chicks? gardens? a new coop? so many possibilities await in 2012! 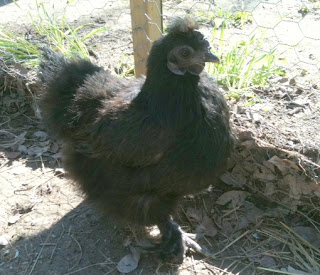 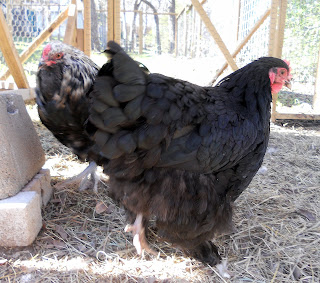