remember this?  these two tiny chicks?  back in june i regaled you, Dear Reader, with pictures and anecdotes about our brand new fuzzy fluffy chicks, and wondered who they would become and what they would look like.  not surprisingly, they became grown up chickens.  it has been fascinating to see their progress, and i look forward to their first egg probably toward the middle of december!


tumblr has grown into a very fancy chicken, her feathers a riot of shiny greens and subtle yellows, bright oranges and dark reds.  twitter has matured into a lovely soft-plumed blue marans, with the rather odd dual effect of being an attractive bird and looking a bit like a buzzard.  they aren't quite full-grown yet, but they are truly coming into their own as full-fledged (literally!) members of the TUFlock.  i can't wait to see what their eggs look (and taste!) like.

speaking of eggs, sammo/bolo/pearl/ninja have been laying like gangbusters, and i was able to create a whole mess of delicious egg salad finger sandwiches for a recent family dinner party.  there is something quite satisfying about hard-boiling a slew of home grown eggs! 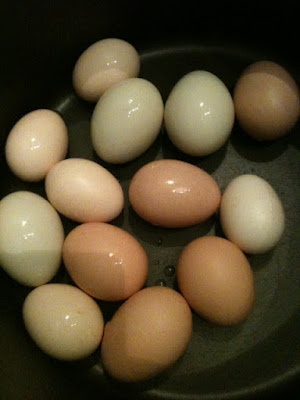 the laying ladies have slowed up a little with the time/season change, it would appear, but i'm sure they'll be back to normal eggliferation soon.  i deeply appreciate their contribution to our household and, indeed, my psyche: one recent tuesday night, i was feeling a bit sorry for myself after a hard day at work.  it seemed that nothing could lift my spirits, that i was glued to the couch by the potent adhesive combination of lonesome and lazy.  then, i had a sunny side up idea... 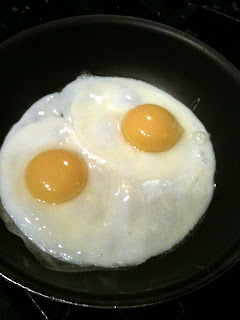 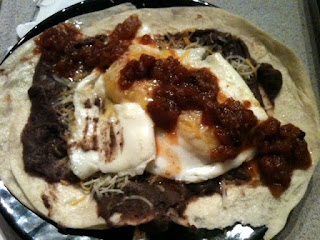 ...that i promptly made into huevos rancheros!    the evening was saved by the chicken(s) and the egg(s).  amazing how home-made good food can change one's perspective in an instant.  another case in point: dungeness crab and asparagus, prepared by TUF chef dan one recent evening in which we had the fortune to eat together at home... 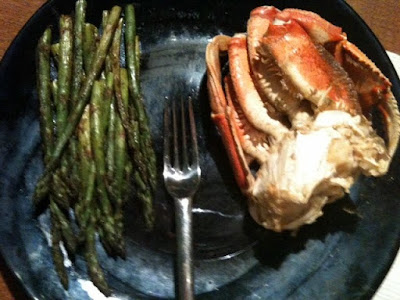 in other news, it's thanksgiving break!   i have so much to be thankful for, and so much to look forward to.  the science class pets, Hairelena and Spot, have come home for the break, so they have added their ranks to our veritable home zoo.  other members of the household have barely noticed the newcomers, preferring to focus on the recent addition of a new fuzzy blanket to the living room couch: 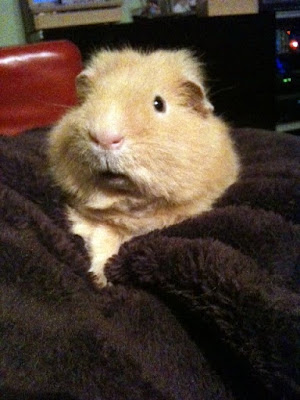 or hope that something awesome is going to fall out of the sky: 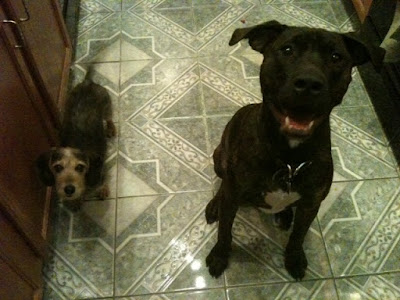 at any rate, the holidays approacheth, and my favorite time of the year is upon us.  an important school long haul is over, and we are settling into our new schedule. last night i woke to the sound of Big Rain, and today was coolish, sunny and windswept.  this week there will be family, friends and food...more on that, and other adventures, to come!  november on the TUF in the ATX!  i am giving thanks!
spouted by Unknown at 3:01 PM 1 comment:

TUF Times, They Are A'Chaaaaangin... 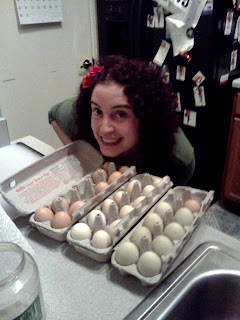 look at all those eggs!  i can't believe it!

the chickens have been outdoing themselves.  they trade off being the Champion Daily Layer...sometimes it's bolo, sometimes it's sammo, sometimes pearl and ninja are in a dead heat, but we are getting 2-3 eggs per diem.  in fact, just a couple days ago we had our first Four Egg Day. 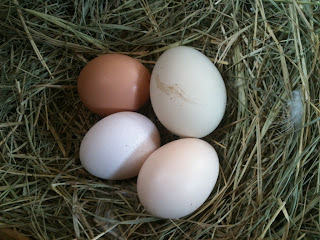 we've found ourselves with a random extra dozen pretty often lately!  we have given them away to our neighbors, some friends, and my mom so far.  i can't wait to see who our next egg victim will be.  after all, that was part of the original TUF goals. looking back on those, i am pleased with our progress!  we are overachickening, compost is happening as envisioned, patronage of farmer's market has continued, and we are more aware consumers.  the garden is still unrealized, but there is time and latent enthusiasm for that yet.

we have had some changes around here at the TUF...a big schedule shift has caused us to re-configure our daily comings and goings, and school has ramped up to the most challenging part of the year.  serious cooking has become a slightly less frequent activity due to time factors, and jogging has once again entered the picture.  but new rituals around food, fun and TUFness await and have even already materialized!

less frequent dinner sessions mean more exciting culinary adventures on the days when such things are possible, so we've had some tasty and novel foodsperiences lately. one of the stranger of these involved feral hog ribs acquired at the farmer's market, on special from a french-transplant farmer.  i asked, are feral hog ribs good? he shrugged, accompanied by the slight gallic chin-jut, and replied: eez a pig.  pigs are good, eh? i was sold. 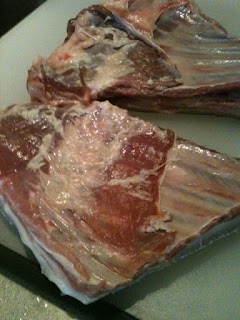 they looked good, too, all richly marbled with fat and smelling like sweet-summer-fresh pork.  but there was one important slightly off-putting thing about them. 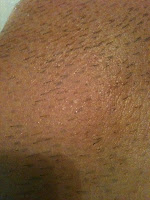 we weren't entirely sure how to handle this. the meat we are used to here on the TUF is generally skinned, or plucked or scaled, and this was an entirely new...um, animal?  at any rate, desiring to be more conscious and compassionate carnivores, we were determined to give the feral hog the appreciation for which s/he gave hi/er life.  we decided that we'd just sear it super hot skin-side-down first on the grill.  that's right, BURN it off.  *yeek!* 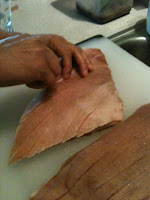 dan took a razorblade and scored the skin first in a cross-hatch pattern that looked like it would be delicious, once the hair was no longer there. we then boiled the ribs in water to cover, seasoned with rosemary and garlic and some other random spices, for about 20 minutes.  then we put those suckers on the grill, hot hot at first to (see above) and then lower for juiciness.  dan improvised some foil snakes to raise the ribs off the iron after the searing process. 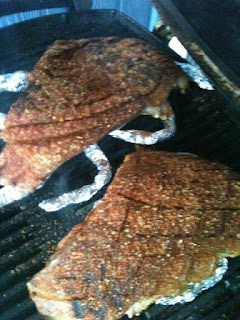 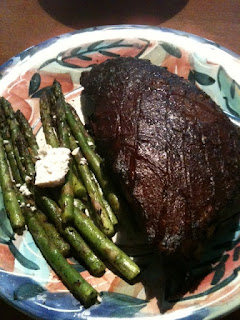 we seasoned the ribs with a house blend of paprika, sea salt, a bit of rosemary, some garlic powder,  and  some ground mustard.    we grilled 'em for about 25 minutes.

when finished, they looked beautiful.  we served them with sauteed asparagus (which i immediately decorated with local goat cheez), and the meat was delectable.

HOWEVER. there was hardly any of it!  the skin, though rendered hairless as expected by the inital high heat, was tasty but tough. i have heard of delicious crackling pork skin, but this was not particularly it.  and the meat morsels were nearly obscured by a LOT of rather greasy unrendered pork fat.  while highly novel and entertaining to undertake, feral hog ribs seem rather overly complicated for the less-than spectacular result.  not sure whether that was due to our inexperience with such things or just the cut of pork itself; regardless, maybe we'll try the french farmer guy's muscovy duck next time instead! 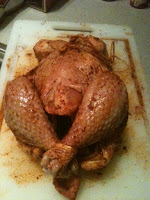 in other culinary news, we did a farmer's market chicken in the rotisserie the other day, and it was 100% delish.  toaster-oven-rotisserie chicken is among our well-loved dishes, and if you don't have a toaster oven/rotisserie yet, i recommend you stop reading this or doing whatever else you're doing and go get one.  it will Change Your Life. 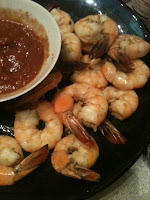 Another tasty farmer's market acquisition were these huge prawns from the independent gulf fishing guy that shows up there every once in awhile!  let me tell you, they were ENORMOUS. we boiled them just briefly with garlic cloves and a bay leaf in cayenne, paprika, mustard seed, coriander seed,  garlic powder,  and  maybe a couple other spicy spices.  then had them with horseradish/ketchup/wocestershire cocktail sauce, our respective adult beverage of choice,  and a couple star trek TNGs.  per. fec. shun.

a final note: halloween has come and gone, and per usual, a) the weather is going wonky (freeze warning tonight, back up to mid 70s and 80s next week) b) we made some KILLER AWESOME jack o lanterns.  okay, dan made them, i "supervised" and cheered. okay, we waited until the last minute and ended up with two weird-looking un-carving-friendly specimens and a pie pumpkin.


Dear Reader, thank you for reading.  sorry for the long delay.  stay tuned! more soon! in theory!
spouted by Unknown at 7:59 PM 1 comment: