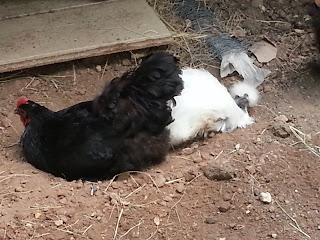 ah, the beginning of fall.  when the temperatures drift down into the balmy mid-nineties, and there is a chance of rain sometimes.  actually, all facetiousness aside, the mornings and evenings have been beautiful!  and enough rain has fallen that the back yard is full of chickweed and egg production is ramping up again. i'm excited about the change of seasons, and fall air is some of the best air.

sadly, we have lost another chicken.  this time there was no disease or predation involved...earlier this week bolo vanished without a trace! there she is to the left, the big black one, having a roll in the dust with pearl last sunday.  by tuesday, however, she was gone. just gone!  no feathers, no yard kerfuffle, everyone had been in the run all day.  all other fowl were fine and normal. but when i went out to the yard after work to give the ladies and gentleman their yard time, she simply was nowhere to be found.

i keep hoping she might come back, but i think it's been long enough that such hope is lost.  my best thought is that she's been bodily assumed into heaven, rapture-style.  at least that's my favorite theory...several others make perhaps more sense but are far more depressing.  she was a non-flyer, but had accidentally hopped out of the run once a long time ago--she was never one for adventure.

needless to say, all remaining chickens now have flight feathers 1-8 clipped on their right wing, like i did sammo a couple months ago, to prevent further chicken raptures.

i wonder if she accidentally hopped out again, went for a mosey, got lost....and then was bodily assumed.  at any rate, wherever she is, i hope she enjoyed her life here and is enjoying her next life.  if not, i'd like it if she would come back. 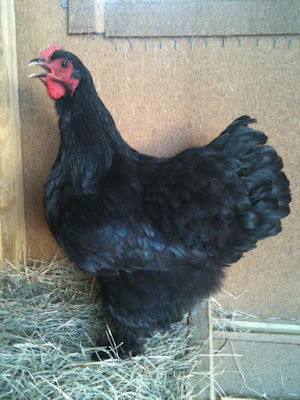 in other, better news, we recently acquired two new girls to bump up egg production and add some new feathers to the flock.  introducing tony parker and scotty pippen!

tony parker is a lovely young barred rock hen, a classic breed. true to her name, she is especially quick and agile, and does not seem to like to get picked up yet.  however, once caught, she will happily sit on the available lap for pets and chicken talk.  she should start laying big brown eggs any minute!


scotty pippen is a beautiful red star chicken who, unlike her new sister thus far, is quite friendly. she seems to enjoy being picked up and cuddled, and even hangs around waiting for such attention.  her breed is also an egg-laying machine, and so we are much anticipating her egg scene debut.  in fact, she was destined to go to an _actual_ egg laying machine--a big production chicken house--which explains why her beak was cut.  but here on the TUF, her beak can grow back in all its glory and she can party in the run and yard all day.  i look forward to seeing her beak back!

all chickens have made the adjustment seamlessly, both to the new additions and the loss of dear old bolo.  the flock numbers six once again--tumblr (the rooster), sammo (easter egger), pearl and ninja (original silkies), scotty pippen and tony parker.  we pause to remember the TUFlock chickens who have gone on to the great free-range in the sky: soft grey twitter, baby lil' bitz (we barely new ye!), and big black ol' bolo.  thanks for all the eggs and fun.

and finally, a bit about the future: dan and i are pleased to be expecting a new HUMAN addition to the TUF to join us in early march 2013!  all is well so far, and of course we will appreciate another TUF hand around to help care for all these crazy creatures. that's why people originally starting having kids anyway, right? more help around the farm?  maybe we can actually start that garden i've been screaming about since the beginning of this whole experiment!

speaking of experiment, and as a final note, here is a picture of the fantastic carrot soup i concocted the other day.  i had also (true to TUF philosophy) used a bunch of farmer's market vegetable odds and ends, and the frozen carcasses of a roasted local duck and chicken, to make a killer-awesome no-waste stock as the base for this soup.  i basically used this recipe, with lemon juice but no zest, a zillion cloves of garlic, and only 1/4 cup of cream, and it came out pretty dang delightful.  and healthy! mostly! 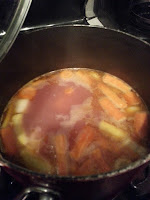 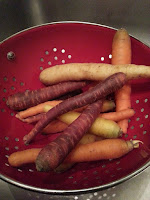 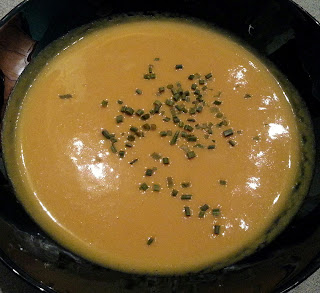 anyway, there is much coming up to discuss, what with the changing seasons, new girls, new food, new future prospects and all.  thank you for reading, Dear Reader, and though i'm clearly not the best at it, i'll renew my efforts to keep y'all posted and document the process!